This is the story of a world first endeavor, an expedition to kitesurf one of the 7 wonders of nature. This story was set to test our team against a series of grueling physical, mental and strategic demands; some we were prepared for and others we were not.

I first realised I wanted to kitesurf on Table Mountain on my second climb up this iconic mountain in Cape Town, South Africa. I’d spent the past months kitesurfing in the ocean below the mountain. It was time to do it on top.

The top of Table Mountain wasn’t ever going to be the safest kite spot in the world but with 16 years of kitesurfing experience to call on, including 15 years travelling the globe as a professional instructor, I reckoned I could cope. But I decided to call in a little help anyway.

I asked around and was told nobody had done it before, so I couldn’t get any advice on how to approach my adventure. I did manage to find some willing accomplices though, and we set about planning our adventure. 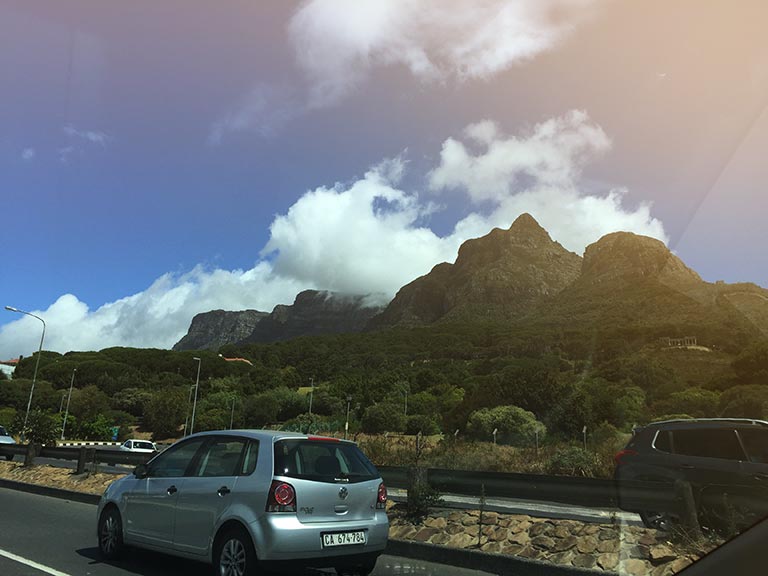 Our group was a 4 man team of professional kitesurfing instructors and school owners, Chris, Christian, Hilmar and myself, whom together have over 55 years of experience kitesurfing. Between us we were probably as well equipped as anyone to make sure our adventure was as safe as possible.

For over a month we played with the idea daily, trying to read the conditions as we looked up at Table Mountain from the world famous kitesurfing spots at Blouberg and Big Bay. We eventually decided to kite on Pink Lake, and for the climb we chose Skeleton Gorge, a steep ascent winding its way through the stone pine forests of the lower mountain gorges to the rocky heights high above Cape Town.

One morning we awoke and the day had finally come to make some news. 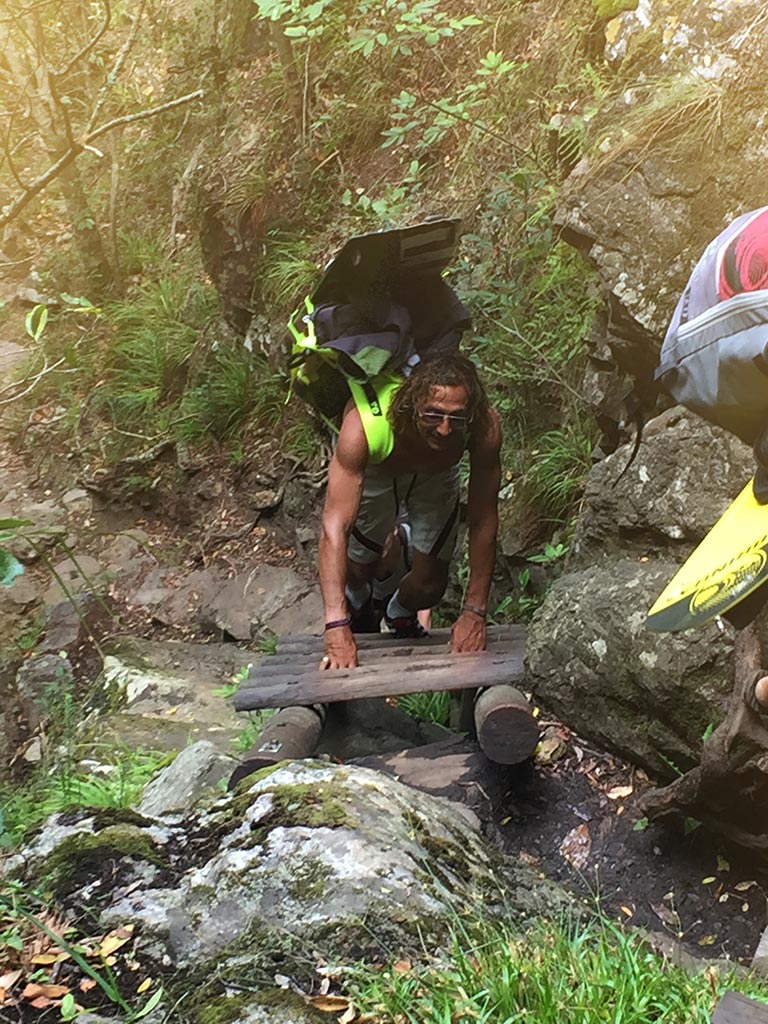 After a couple of wrong turns as we traversed towards the Skeleton Gorge access point we finally found the trail marker and were ready to begin the ascent. Our boards were on our backs as we climbed vertical ladders, hiked through the jungle and passed up through Skeleton Gorge. 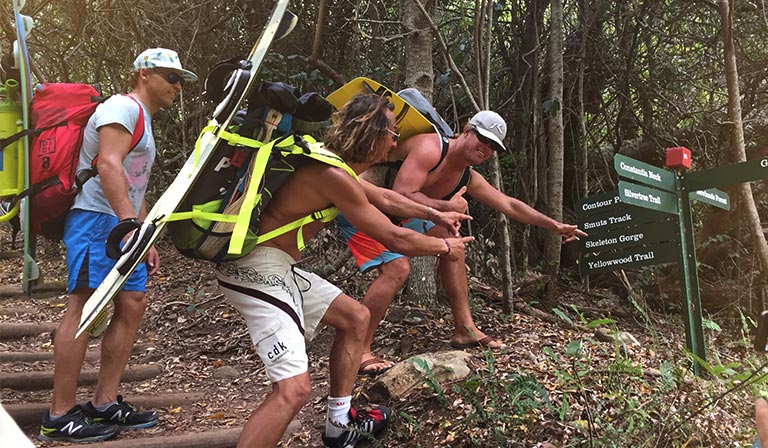 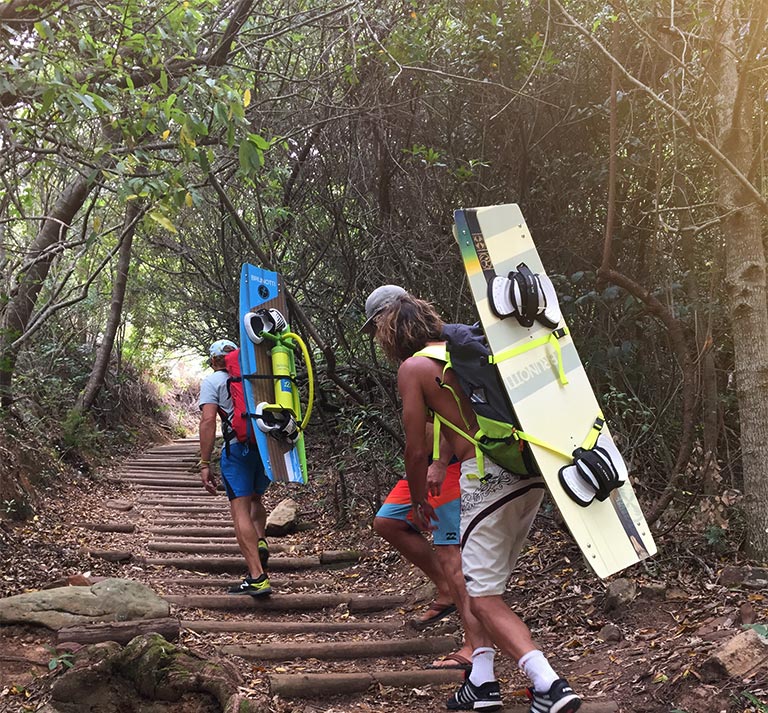 As we crossed paths with other hikers on their descent, they were surprised to see us with kite equipment.

“Are you guys going to surf in the woods” we would hear.

“Is this the right direction to the beach”. we would say. 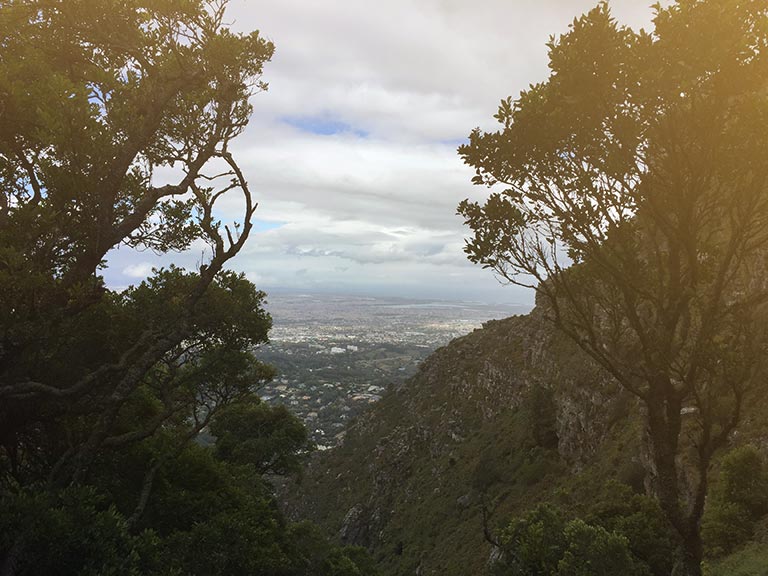 We pushed on closer to the summit, though after 2 hours of climbing with all the gear we were tiring a bit. Visibility was only a few hundred meters but we stuck to our route as best we could. 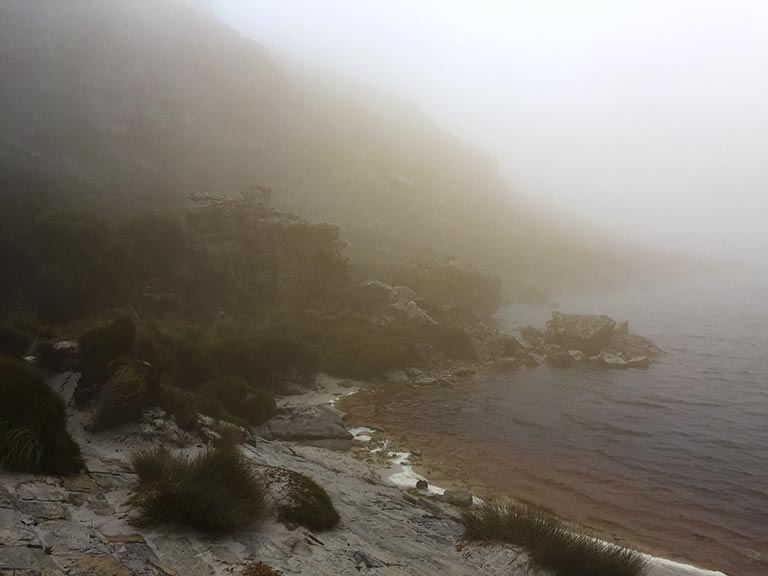 As we neared the end of the gorge our hopes started to fade. With the cloud cover the wind was very light, only 8 knots at most which would not be enough power for our 11, 10 and 8 meter kites.

After two hours hauling our gear through the mist and clouds this left us feeling pretty down, but we carried on regardless and our spirits were lifted when sunlight broke through just as we stumbled on Pink Lake. The famous Table Cloth lifted as if to bless our mission and the warmth of sunshine revitalised our strength as we drank in the spectacular views from the roof of the mountain.

The Cape Doctor was onside too. Cape Town’s famous wind, the friend of all kitesurfers, started to blow smoothly across the lake. We were pleasantly surprised to find that there were no swirly wind patterns on the lake or strong mountain gusts. This was when we knew that our plan was about to become a reality: we would be able to kitesurf Pink Lake on top of Table Mountain.

It was now or never. 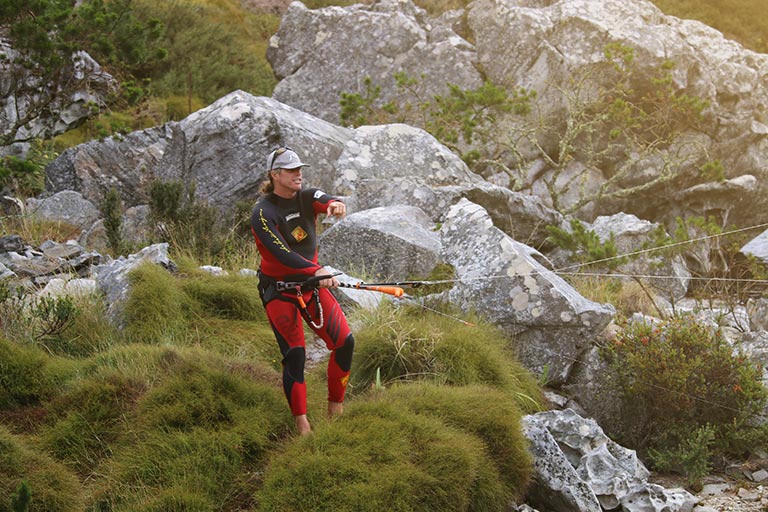 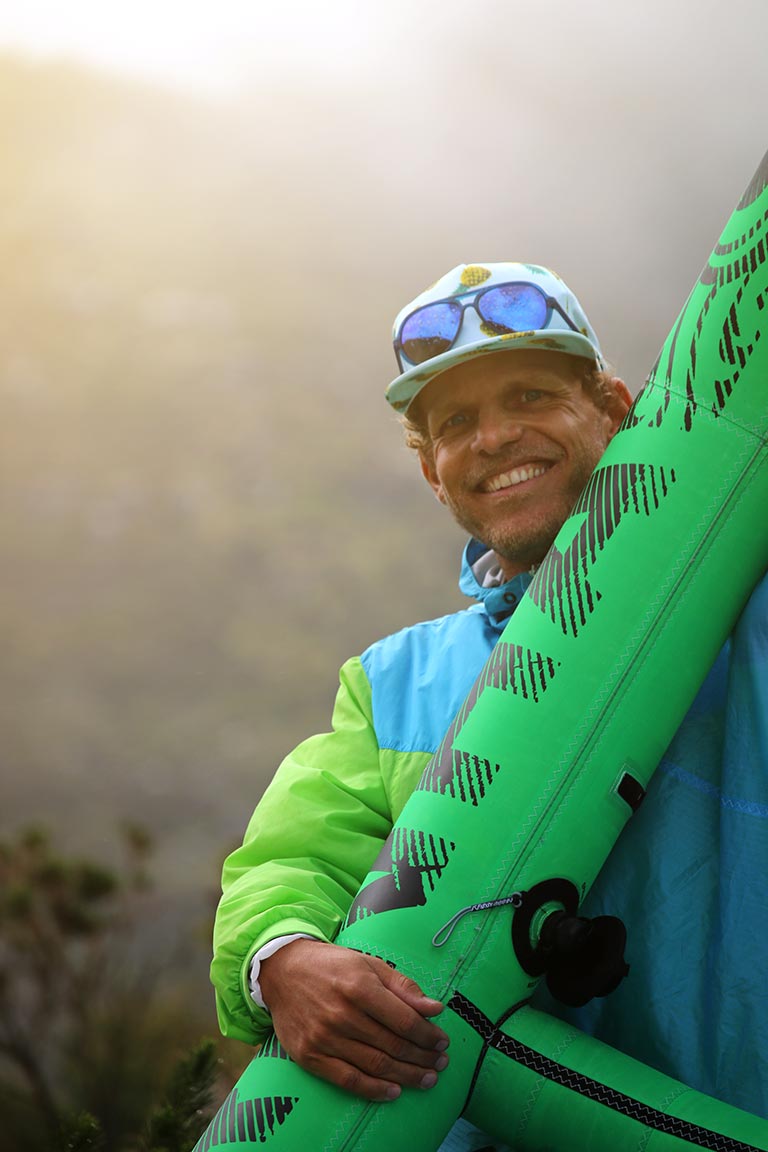 Finally, the moment we had been striving towards was upon us, as I attempted the world’s first seconds of kitesurfing on top of table mountain. The feeling was simply incredible. A feeling of exhilaration and success, knowing that we did it against so many odds, we achieved our goal, it was now a reality! The feeling of the wind, the water the freedom of kiting on top of the world where no one had ever kitesurfed before was nothing short of awesome. 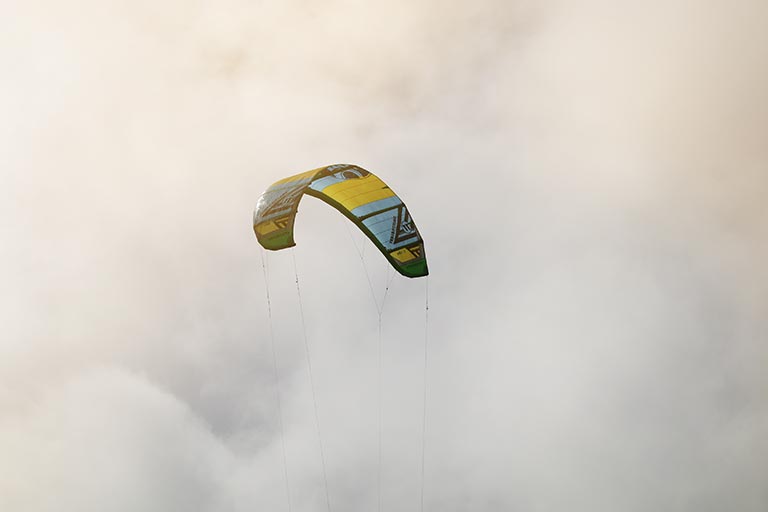 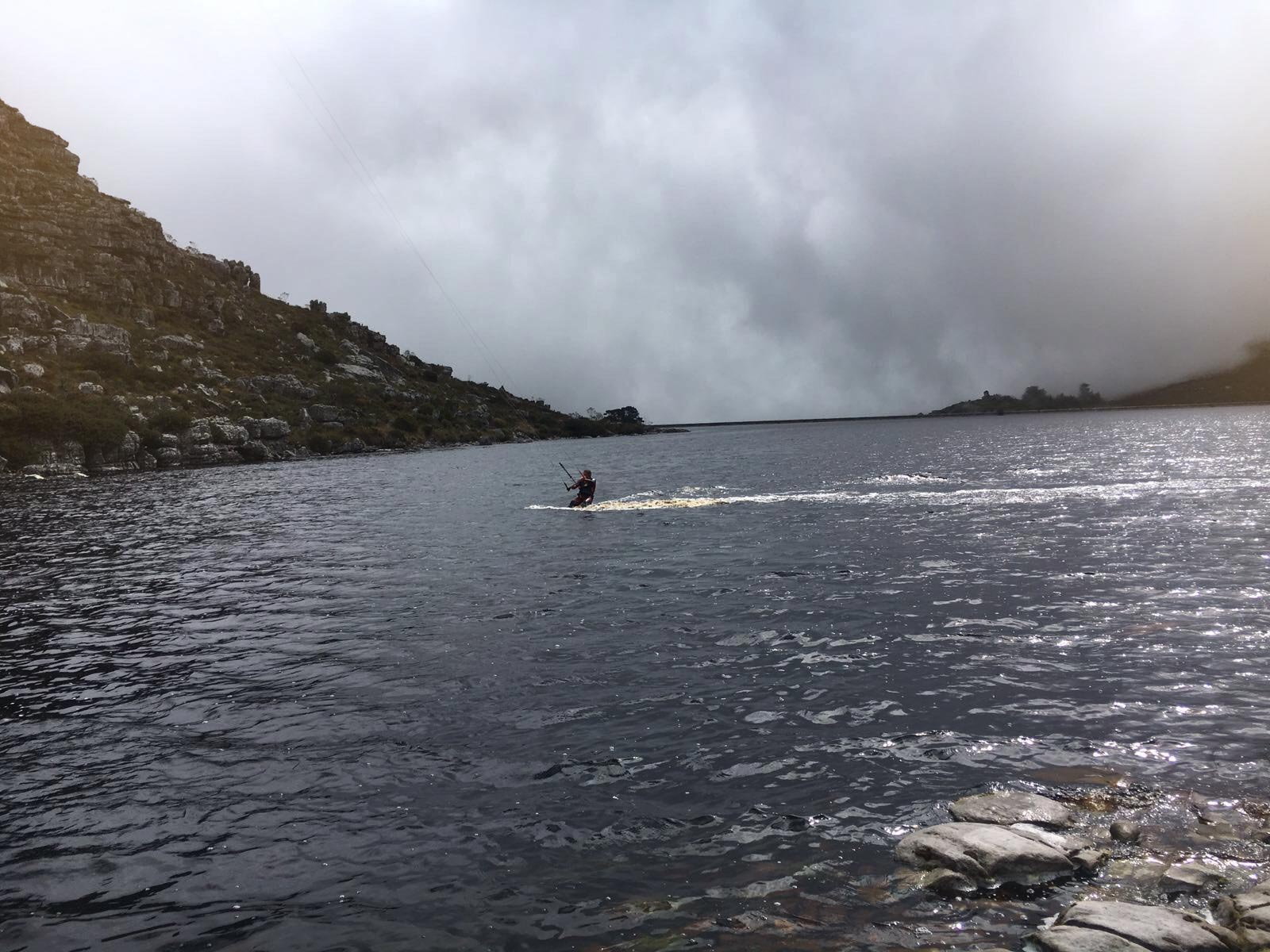 Shortly afterwards Christian also got his moment of exhilaration, as he kitesurfed his way across Pink Lake and into history. By normal standards it wasn’t a particularly amazing kitesurfing session. The wind was a little light, and we couldn’t do any tricks or freestyle. But where it was made it special. 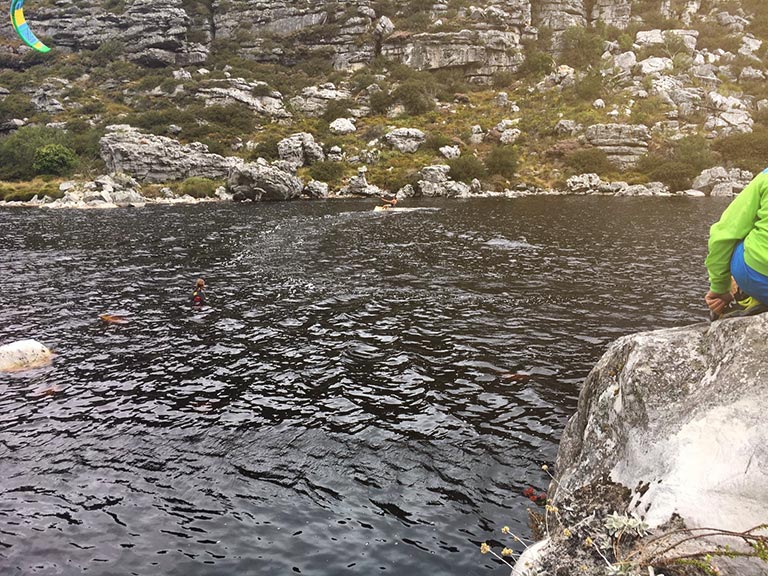 We had kitesurfed on top of Table Mountain, South Africa. 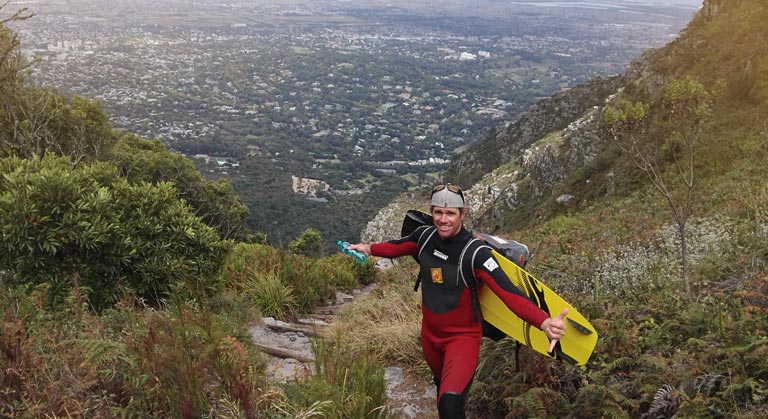 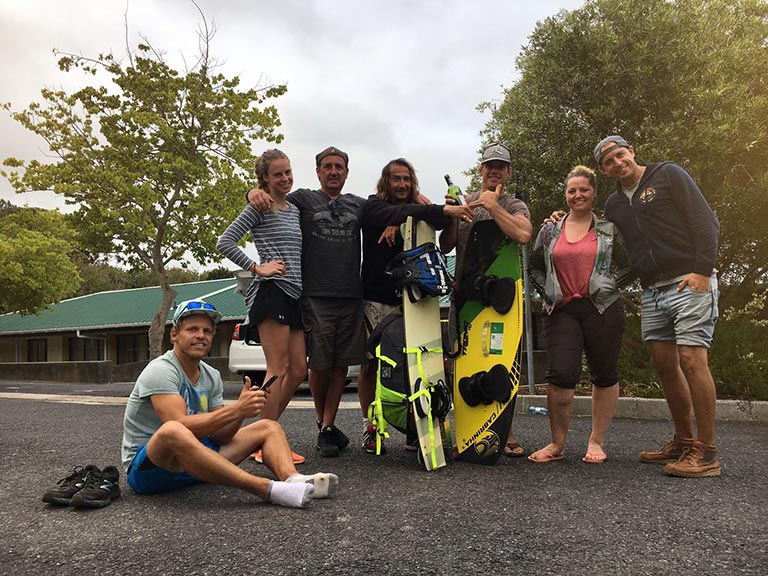 If you want to take you first step to enjoying adventures like this, visit us and learn to kitesurf! https://www.graykite.surf/